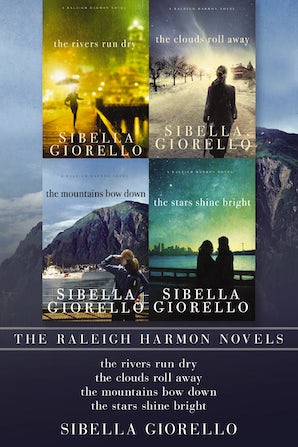 The Rivers Run Dry, The Clouds Roll Away, The Mountains Bow Down, The Stars Shine Bright

Special Agent Raleigh Harmon is good at her job as a forensic geologist, but not as good at bureau politics. As one of the few females on the team, she finds herself in a strange land when she's transferred from Richmond to drought-stricken Seattle. When a hiker suddenly goes missing and a ransom note arrives, Raleigh vows to find the missing college girl and leave no stone unturned.

The Clouds Roll Away

Closing her assignment with the FBI's Seattle office, Raleigh Harmon returns to her hometown of Richmond, Virginia, expecting a warm welcome. Instead she finds herself investigating an ugly cross burning at a celebrity's mansion and standing in the crosshairs of her boss at the Bureau. And the deeper Raleigh digs into the case, the murkier the water becomes.

The Mountains Bow Down

That's what FBI Special Agent Raleigh Harmon believes as she boards a cruise to Alaska. A land of mountains and gems and minerals, the Last Frontier is a dream destination for this forensic geologist who's hoping to leave behind a hectic work schedule and an engagement drained of romance, but like the scenery that surrounds the cruise ship, Raleigh discovers a mystery so daunting that even the mountains might bow down before it.

After the FBI suspends her for bending its rules, Special Agent Raleigh Harmon is looking for a chance to redeem her career.

Sent undercover to a thoroughbred horse track, Raleigh takes on a double life to find out who’s fixing the races. But when horses start dying and then her own life is threatened, Raleigh realizes something bigger—and more sinister—is ruining Emerald Meadows.