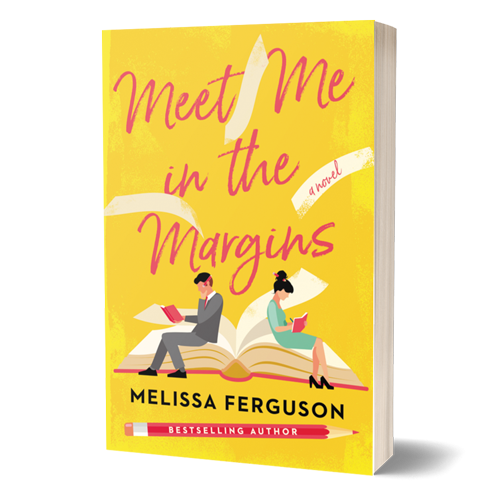 MEET ME IN THE MARGINS

There’s no doubt about it. She’s falling for her mystery editor. If she only knew who he was.

When You’ve Got Mail meets The Proposal, Melissa Ferguson’s latest romantic comedy is one for the books.

Savannah Cade’s dreams are coming true. The Claire Donovan, editor-in-chief of the most successful romance imprint in the country, has requested to see the manuscript Savannah’s been secretly writing while working as editor herself—except at her publishing house, the philosophy is only highbrow works are worth printing and commercial fiction, particularly romance, should be reserved for the lowest level of Dante’s inferno. But when Savannah drops her manuscript during a staff meeting and nearly exposes herself to the whole company—including William Pennington, new publisher and son of the romance-despising CEO herself—she races to hide her manuscript in the secret turret room of the old Victorian office.

When she returns, she’s dismayed to discover that someone has not only been in her hidden nook but has written notes in the margins—quite critical ones. But when Claire’s own reaction turns out to be nearly identical to the scribbled remarks, and worse, Claire announces that Savannah has six weeks to resubmit before she retires, Savannah finds herself forced to seek the help of the shadowy editor after all.

As their notes back and forth start to fill up the pages, however, Savannah finds him not just becoming pivotal to her work but her life. There’s no doubt about it. She’s falling for her mystery editor. If she only knew who he was.

“Ferguson has penned a lively romance for every bookworm who once longed to step through the wardrobe or sleep under the stairs. Meet Me in the Margins brims with crisp prose and crinkling pages as Savannah Cade, lowly editor at a highbrow publisher, secretly reworks her commercial fiction manuscript with the help of a mystery reader—and revises her entire life. You’ll want to find your own hideaway to get lost in this delightful, whip-smart love story.”

—Asher Fogle Paul, co-author of Without a Hitch

"This novel is easily my favorite discovery of the year. Warm, witty, and wistful, its two central characters took up residence in my heart and I'll never forget them."

"This book was sweet and fun with moments of laugh-out-loud humor. It was entertaining and hard to put down."

Bestselling author Melissa Ferguson lives in Tennessee, where she enjoys chasing her children and writing romantic comedies full of humor and heart. Her favorite hobby is taking friends and acquaintances and turning them into characters in her books without their knowledge. Connect with her (and prepare for the possibility of becoming her next character) at melissaferguson.com; Instagram: @our_friendly_farmhouse; TikTok: @ourfriendlyfarmhouse.

Some recent releases include The Cul-de-Sac War, The Dating Charade, This Time Around, and more romantic stories.